Dream In Real Time, the first full length cd by Detroit's own Delta Waves,
is a split label release with TQR&R + Burnt Hair Records.
Download a mp3 of "Lovers Leap" from Dream In Real Time here!
Also, be sure to check out their earlier material at mp3.com!

in the beginning...
...started by greg naumann as a series of recording projects in early 97, the music began taking on original form by the help of friends that were also of the

detroit space rock scene.after receiving much college radio air play and good feedback greg began to make the DELTA WAVES his main musical outlet. other contributing artist include rebekah tufts, rob moon (gravity wax), mike ebberline (unexplained transmissions), and jenny abramov (too many jennies). the current battery of live performers are greg naumann and anton abramov. don't be surprised to see a friend or two helping out musically in a live setting at any given time. in 98 the 7" vinyl 'Andromeda Drone' was released on Sonic Brotherhood Records. the songs were recorded with minimal recording equipment , a 1980's fostex 4 track to be exact. this release is said to have a slowdive/flying saucer attack sound on one end and has been compared to fellow michigan artists such as Windy and Carl or Asha Vida. also that year and the following up to now the band has been placed on a couple note worthy compilation releases such as the Masstransfer Magazine installation #3 c.d with the minimal single 'Saturnalia'. in 99 they were placed on the now nearly impossible to find 'Little Miss Loveseat' compilation off Electronic Cow Records with yet another minimal yet lush single 'Lady of the Lake'. Greg and Anton of the Delta Waves have just finished up on a soon to be released c.d. called 'The Delta Waves Dream in Real Time' . this work takes on a more ambient/electronic sound, layered with floaty guitar wash. the Delta Waves are very happy with the direction the music is taking because it has definitely became a sound of their own where originality is a factor and sound depth is explored.

just as Dream In Real Time was going to press, Ryan from Fuxa joined the band to take over percussion duties. Ryan's addition brings a fuller, more realized sound to the Delta Waves.


reviews...
MASSTRANSFER magazine publisher and editor Ryan Anderson, Review on the ANDROMEDA DRONE- 7" - "DELTA WAVES is a projected headed up by GREG NAUMANN, that carries on the DETROIT space rock

tradition. "ANDROMEDA DRONE" is their debut 7-inch on SONIC BROTHERHOOD RECORDS and portrays an interesting array of sound environments. the a-side drones along quite passively, until you begin to lose touch with reality. At that moment, the drone breaks and a coda of guitar ,bass and drum emerges. the b-side presents a shimmering waltz dense with texture. file this one next to ASHA VIDA and WINDY & CARL."

Listen.com review by Doug Russell - "Soothing washes of delay-heavy guitar chime moving at the leisurely pace of a space walk. No, a space stroll. Actually, space crawl is more appropriate." 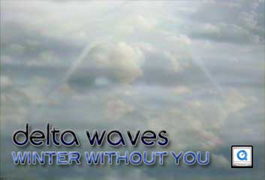 Delta Waves, left to right: Ryan Anderson, Greg Naumann, Anton Abramov
(NOTE- The Delta Waves are not to be confused with the legendary Detroit outfit "The Deltoids". Thank you.)